Chef Braddock of Eban’s Bakehouse puts the fires to his gluten-free bread showing us how versatile they all are. For breakfast, he showcases making a crowd-pleasing french toast, and then he moves on to a warm, oozing, hearty Reuben sandwich for the lunch line. He’s full of tips and insider tricks to getting that griddled crust perfect for all occasions. He brings decades of cooking knowledge to the table…you won’t want to miss this! 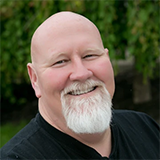 Eric Braddock has 35 years in the restaurant industry, prior to starting Eban’s Gluten-Free Bakehouse he owned and operated 3 of his own restaurants, was featured in many food and cooking magazines and appeared on numerous cooking shows on ABC, CBS, NBC, PBS, and HGTV. Chef Braddock was one of 5 Celebrated chefs In America selected by the Nation Pork Producers and has won many State and National Awards in culinary competitions.