Beer you can believe in! Hear the stories, ask questions and learn about the craft gluten free beer movement from Brian Thiel, co-founder and managing owner of Ghostfish Brewing Company, the largest volume producer of dedicated gluten free beer in the USA. 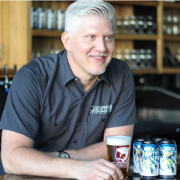 Meet Brian Thiel, the managing owner and co-founder of Ghostfish Brewing Company, a brewery dedicated to using 100% gluten-free ingredients, based in Seattle, WA. Ghostfish, now in its sixth year, is the largest volume producer of gluten-free beer in the U.S. and has become one of the most acclaimed gluten-free breweries in the world. Ghostfish beer proves time and again to be at the forefront of gluten-free brewing with five Great American Brewing Festival (GABF®) medals and numerous additional awards both in and out of the gluten-free category.
Prior to launching Ghostfish, Brian spent nearly 25 years in the aluminum can industry between two of the world’s largest manufacturers. Brian is a graduate of Klemmer & Associates, a leadership development program, and the Small Business Administration’s Emerging Leaders program.
During his free time, Brian enjoys cooking, traveling, and a range of outdoor activities. But what he cherishes most is spending time with his daughter, Berlyn.